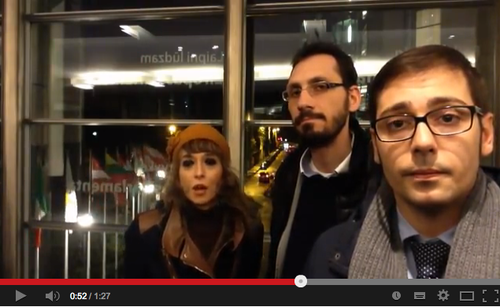 In the “Manifesto for a Free and United Europe”, in 1942, Altiero Spinelli writes:
“Young people are to be assisted with all the necessary provisions in order to reduce the gap between the starting positions in the long struggle ahead of them. In particular, State schools ought to offer the effective possibility of continuing their studies up to the highest level to the best students not only to the wealthy ones; …
“A series of measures ought to be taken to unconditionally guarantee a decent standard of living for everyone, without lessening the stimulus to work and to save. In this situation, no one would any longer be forced by need and misery to accept unfair work contracts”.
With these words in mind for me the Youth Employment Guarantee plane makes sense only if it spells “plan against precariousness”.
In order to reach such an ambitious goal the EU has to change in several fields: here are some initial suggestions:
The EU has to engage in a large social plan aimed at establishing a higher standardization of the social and workers rights. It is time to get over the Bolkestain directive standards that allows less favorable conditions to be applied across the EU. This penalizes fair employers and puts on them an unsustainable burden while giving an unfair competitive edge to unfair employers. The claim to offer a job or an apprenticeship within four months from the end of the study cycle will become effective if the market competition is not set on dumping on social rights but on innovativeness and social capital valorization;
This brings me on my second point: at present the EU does not have an effective young entrepreneurs innovation scheme. This is becoming very high in the public discussions in Europe, and it has been underlined in a recent TV interview by Vice President Pittella and Amalia Sartori Chairwoman of the Industry Research and Energy Committee. All EU and national support schemes are set on a reality that does not exist anymore. We need something like the American “Steve Jobs Act” (http://www.theatlantic.com/politics/archive/2011/10/the-steve-jobs-act-why-its-time-to-invest-in-entrepreneurs/247065/) otherwise we will exclude innovative self employment. And we need to change the rules and the conditions: Innovators and makers have great ideas and genious intuitions, but don’t have normally no financial solidity. On the other hand they don’t need much to start up. The EU should lower the threshold of the project value and require no financial availability or match funding from the applicant but only a sound innovative industrial project.
The European Investment Bank should stop their “safe policy” to lend low interest loans only to proven technologies: This cuts out all 3 D printing, hygorgen and smart grids projects and (we are reported) even solar cooling and anaerobic bio digestors. It makes no sense that the EU bank only gives money to photovoltaic projects that have already been awarded twenty years feed in tariffs or energy efficiency in building projects. Any commercial bank can do the same! What is the interest in having a EIB then, if the technologies fostered by European programs cannot be funded because they are not considered “proven” or (even worse) “commercially sustainable?
Final point, we should go back to the basic idea of great President Jacques Delors and develop a Social Europe International negotiations strategy, with the help of the Trade Unions Confederation (CES-ETUC) , and challenge Cina, and all the BRIC and developing countries on this ground. Freedom of association for citizen and unions, general welfare, minimum wage, should be implemented as a basic factor of any economic development in countries which are our commercial partners. Or else we should review and reconsider radically our commercial agreements with them, because this creates unfair starting conditions and play grounds for our entrepreneurs. In order to do that, we need a cohesion in our social policies (as I said in my first point) and a strong management of our international relations that simply cannot be assured by the present Commission and by the present  High representative of the Union for foreign affairs and security policy.
Ms Ashton. We need a new governance of our international relations that reflects the idea of Altiero Spinelli that “… once the horizon of the Old Continent is passed beyond, and all the people who make up humanity join together for a common plane, it will have to be recognised that the European Federation is the only conceivable guarantee that relationships with American and Asiatic peoples can exist on the basis of workers’ rights and peaceful co-operation, while awaiting a more distant future, when the political unity of the entire globe becomes a possibility.”